Weather risk is the potential impact on your business, both with respect to overall profitability or simply success/failure, that relates directly or indirectly to the weather. The U.S. Department of Commerce estimates that 30%, at least $1 trillion, of the U.S. economy is modulated by the weather. Financial statements are awash with comments such as “income decreased $7.2 million as a result of wetter than normal conditions” or “shipments were down 5.5% due the cooler temperatures during the summer months.” In the past, statements such as these were accepted as part of doing business, however, blaming poor results on weather is no longer an excuse accepted by stakeholders.

Weather risk can be defined as financial gain or loss due to a change in weather conditions over a period of time. That period of time can be hours, days, months, or even years. For instance, an outdoor concert has a period of weather risk over the course of several hours, the time of the concert, whereas a wind-generated power facility may have a period of risk spanning several years. Products like our Snow Protection and GuaranteedForecast can help. 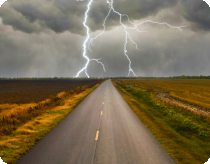